I joined Midlands Orthopaedics in Columbia, South Carolina in 1994. My practice includes:

I lead the nation in hip resurfacing. I began performing metal-on-metal total hip resurfacing arthroplasty (HRA) in 1999. With the retirement of Dr. Harlan Amstutz, I now have the longest track record of performing this operation in the United states. I have performed over 3500 HRA, which is the fourth largest series in the world. In the rare patients that are not resurfacing candidates, I perform large metal bearing total hip replacements (THR). Patients who are worried about rare adverse metal wear failures can choose a ceramic / cross-linked polyethelene THR also done using a minimally invasive technique.

I have pioneered many advances in hip resurfacing:

Hip resurfacing is the best solution for near normal reconstruction of the hip joint in severe arthritis. It is more complex to perform than standard hip replacement. Many excellent hip replacement surgeons have become interested in hip resurfacing in the last 10 years but have given up performing this operation because they encountered too many complications. This has led many experts to claim that “hip resurfacing does not work”. But a number of surgeons worldwide have been able to show superior results with HRA as compared to THR. Currently there are probably less than 10 surgeons in the US who continue to perform significant numbers of these cases with good results. If you are interested in the higher functional potential of this operation, be careful to choose your surgeon wisely.

Although I practice in South Carolina, most patients are from out of state and even from overseas. Typically only a few day stay in Columbia is required. We have perfected remote perioperative patient management. Typically only the immediate preoperative, the first postoperative follow-up at 4-6 weeks and the second at 1 year are done in Columbia. Long-term follow-up is continued remotely.

I developed the first fully uncemented hip resurfacing device with Biomet. I have been using it since 2007 with an excellent track record. I also developed the Biomet Magnum large metal bearing total hip replacement system, one of the few of this class that have a high success rate (Depuy and Zimmer recalls). I was the lead investigator of the first US FDA trial of hip resurfacing leading to approval of the Hybrid Corin Cormet 2000 device in 2007.

I completed a fellowship in joint replacement with Dr. William Bargar, Sacramento, California one of the world's foremost experts in custom implants and surgical robotics. Prior to that I spent 10 years at Johns Hopkins University for medical school and orthopaedic training. 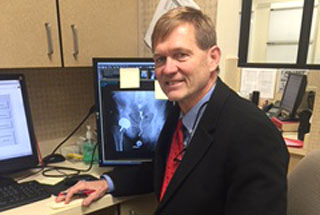 American Board of Orthopaedic Surgery
Board Certified, July 11, 1996

Find us on Google+